The consensus critical diagnosis of the police response to the protests that have followed Michael Brown’s killing seems to be that the violence is a result of the fact that local police forces having become overly militarized. Leftists swear by such an analysis, at least two United States senators have agreed with it, as have local politicians, and The New York Times was even prompted to create a map showing how “ubiquitous” the flow of weaponry and transport from the Defense Department to municipal police. That there has been an increased use of military hardware isn’t a surprise to anyone who tracks police activities — including especially the communities who are subjected to their daily depredations — but it’s at least encouraging to see objections to police activity that target material/structural practices and don’t chalk up the events in Ferguson to the work of a few bad cops. It’s good to see liberals pissed off and conservatives quiet.

As an explanation for why police kill a black person every day or of how entire populations have become almost exclusively juridical subjects, however, the militarization thesis says very little. This isn’t to deny that there has been a massive increase in the number or power of the weapons that cops have to play with or to claim that those weapons aren’t, in their moments of deployment, frightening or effective at achieving political ends. But the militarization analytic places too much emphasis on technology. Cops are not murderous guardians of the state because they have big weapons — they are murderous guardians of the state who possess big weapons to fulfill their duties. It is similar to complaints about the militarization of the border, as if borders wouldn’t be zones of violence and national fortification without the high-powered weaponry and large numbers of guards. The police were highly effective at their functions of marking and disciplining long before the Defense Department started gifting departments technology and will continue to be even if Claire McCaskill and Rand Paul get their way.

“Machines are social before being technical.”

It makes more sense, I think, to analyze the specific social situations into which those elements of militarization are being inserted, and the prevalent social framework for police-community relations over the last two decades has been the broken-windows/community-policing model, in which the police attempt to conduct the conduct of individuals, especially individuals in supposed crime-disposed communities. Under the theory that petty acts of lawbreaking such as turnstile jumping or jaywalking are contagious and lead to bigger crimes and even to a “criminal lifestyle,” the practice of community policing aggressively interdicts at the level of quotidian behavior. In Ferguson, when Darren Wilson told Michael Brown to get the fuck on the sidewalk, he wasn’t (just) expressing the rage of a racist, entitled cop but enacting the theory underlying community policing, that managing the micro movements of certain subjects is the foundation of the fight against criminality. 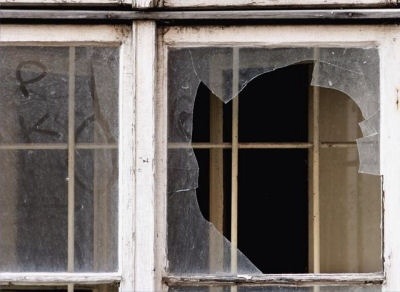 The same motivation guided the Ferguson police’s response to the protests against Brown’s killing. The protestors’ so-called rioting consisted mostly of directionless marching through streets and obstructing traffic, but it was this mildly disruptive presence and micro disobedience — as opposed to, say, gathering at city hall for some speeches, a few chants, and an established march — that triggered the police’s instinct to contain the protestors and direct their activities. This took the form of acting to block streets from marching protestors and keeping public and semipublic spaces clear of their presence. And that’s when the “militarized” hardware and techniques were deployed: snipers, riot gear, armored transport, the no-fly zone, etc. But those elements were not the cause of the police’s response — they were the means for attempting to conduct the actions of the protestors, to discipline the population they represented, and to regulate the behavior of bodies that were already criminal.

If I can be allowed a moment of unambiguity, the National Security Agency did not set up its vast spying program to collect personal information, or really even to “spy” on people in the usual sense. The NSA doesn’t really care about the many ways in which you are fascinated by your cat or about your consumer profile or preferences, which it could find through any number of corporate surveillance databases, or even about your political movements per se. Yes, the particulars of the latter could certainly be useful information and are within the purview of the NSA, but that’s micro, time-sensitive information more useful to local police or federal agents. So far as I know, the voracious NSA set of techniques and processes isn’t equipped to process that kind of data, even if the transmission lines to law enforcement did exist.

More unambiguity: The program is not even really about content. At least until it is. No doubt the information flows have been utilized in some instances, but for now it’s about instituting a system that counters existing networks, many, though not all, of which are digital and based on telecommunications lines. The goal of the program is to create shadow networks that stalk current and potential networks, ones that can mimic, surround, and anticipate in order to repress, short-circuit, and coopt. The Snowden documents so far seem to be silent on the methods for doing that.

As far as an end-game of how the US state might benefit from spying and its revelations, the NSA and the executive branch of course couldn’t and can’t predict what that will be. But if, as seems possible now, the Internet becomes fragmented and segmented, that’s a pretty good outcome for them. A nationalized Internet is much easier to monitor, and in times of crisis becomes much more susceptible to nationalist passions and open to emergency measures. The Merkel revelations might be bad for Obama, but they could certainly be good for the national security state.